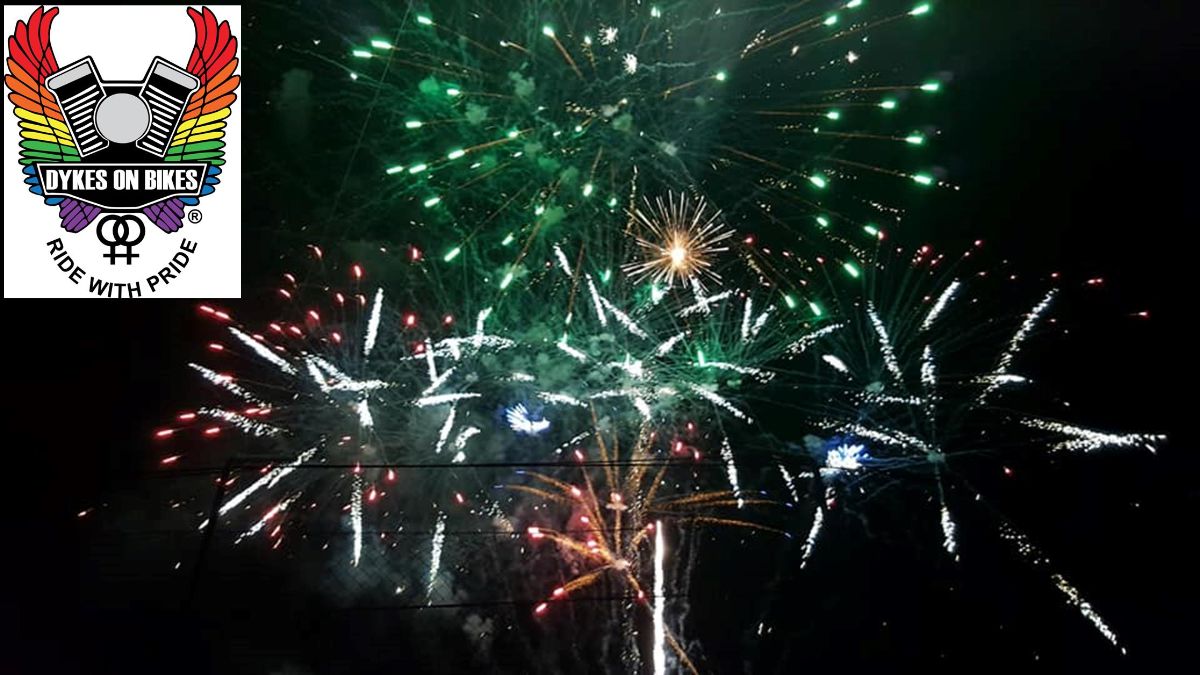 As we say goodbye to our 30th birthday year I thought I’d throw in a few snapshots from last year and have a quick reminisce.
We started the year with our 2nd Big Dykey Picnic.  Although we missed the excitement of the English Women’s Rugby 7’s we still had a lovely day at Coogee.  The weather was again perfect and it was a very relaxing and chilled out kinda day.  This event will be on again Monday 28th January

February & March was full of Mardi Gras goodness.  Fair Day saw us back at the old stomping grounds of Victoria Park and back in our normal location.  The parade was one of the largest turnouts of riders and pillions ever and as always everyone had a ball.  I know we had a lot of newies and a lot of past members come out of the woodwork to join us.  I’m hoping they had such a good time they’ll come back this year.  The after party saw us take over the (Lady) Hampshire and it was like coming home but only better.  DJ Josh took over the decks for the night and more than one person was complaining about sore feet from dancing all night.

We didn’t have the Bike & Tattoo Show in 2018.  There were a number of factors but one of the main ones was the difficulty in getting the back lane of the pub closed off.  This keeps getting more complicated each time we’ve done it but as so many of you seem to love being back at the Hampy we are trying for a bigger and better re-imagined event to be called the Bike & Body Show.  We will be partnering with ACON and if the council allows us, this will go ahead at the end of March to to kick start you after you shake off the post Mardi Gras blues

We had a number of different rides on in 2018 and the lovely and very capable Emily Saunders was our prime go to Ride Leader.  We went North, South and West. Some rides were a huge success and other taught us a lesson in places you didn’t want to go (eg. Wet & Wild)  We ended 2018 with our annual RSPCA Xmas Toy Run and had a great turnout and an amazing array of goodies to donate.  This keeps getting better every year and is sooooo much fun.  It’s perfect for anyone who wants to ride with the group but isn’t comfortable with the longer rides, we don’t go over 70km so L & P platers can come along and we love having folk join us in their cars.  Plus we get to play with cute furry animals.  Simply fabulous.

There was a decent turn out for the AGM and we had a chance to say thank you to Bex Hulands and Emily Saunders for their contributions over the past year.  We also got to say thank you to Jakk who finally stepped down from the committee after years of doing our merchandise and more recently adding the role of Treasurer to the resume.  The new committee consisted of some familiar faces from last year, Lyn, Kendal (now officially Secretary) and Chris, as well as some members like Jenny Gunther and Cass Naylor who have put their hand up again after some time away and a brand new face, Viennessa Wimborne.

The Black & White Ball was held at the Red Rattler again but with a bit of a change this time.  Instead of That Redhead playing for us we dragged Sexy Galexy up from Melbourne and DJ JoSH over from Adelaide and had a roaring 20s themed drag and disco party.  The number of people who took the time to dress up always makes me smile and we had some fantastic outfits.

As usual the X-Mas party was stinking hot and poor Santa was turning the same shade as her outift by the end of the day.  As there was another event on at the Hampy we found ourselves in the front bar this time but considering the weather I think it was a great choice.  Amanda and Nahria did a fantastic job with the presents and thank you to Laura for donating some of her amazing home-made handbags.  Kendal was a stunning Santa although no beard or wig this year due to the heat.

Lots of new and old members dropped in to sign up early to guarantee their choice of colour in the parade.  Remember that the earlier you get your form in the more chance you have to be in the colour of your choice.  As usual we will be closing off membership & registration for the Mardi Gras parade on Monday 18th February.  If you and your pillion do not have your forms and payments in to us by that date you will have to wait until we reopen membership after the parade in March.

This year ended with Dykes on Bikes being invited up to Tropical Fruits to participate in the New Years Eve Festival.  We led the street parade and then did various roles within other events including the famous New Years Eve party and the Recovery party the next day.

Wow….we did heaps this year.  I hope you had a chance to be part of the Dykes on Bikes experience in 2018 and you will join us for more rides, events and good times in 2019. 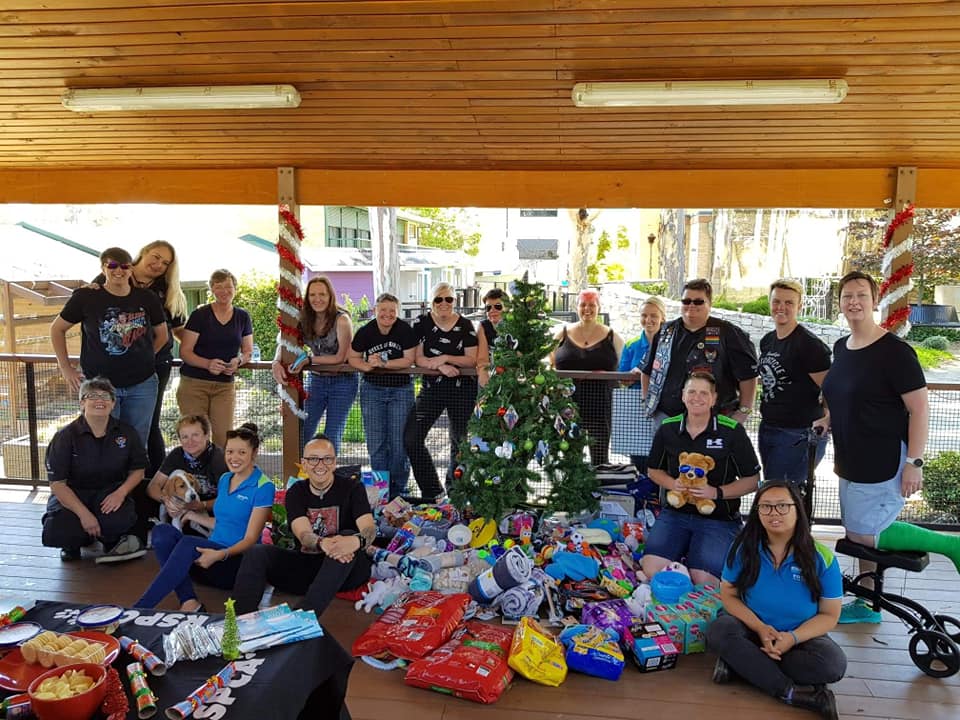 Each year we ride out to the RSPCA shelter in Yagoona and deliver donations for their community outreach programmes.  Apart from making us feel all warm and fuzzy we also get to play with the puppies and kittens, and maybe find a furever friend.

This year we delivered a bumper crop.  Big thanks to all who donated. 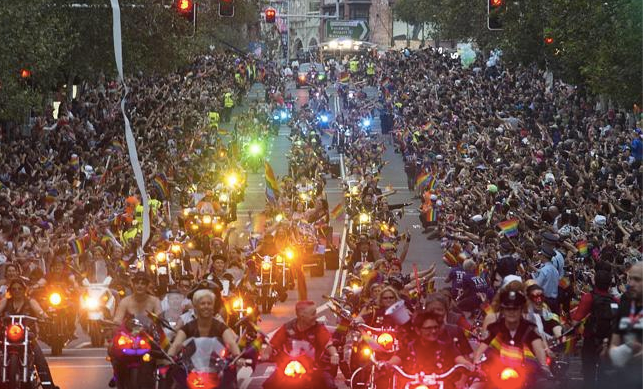 We will be holding another Mardi Gras after party at The (Lady) Hampshire Hotel again.  There will be dancing, entertainment and just a great cruisy night with fantastic people.

We’re taking over the whole pub and inviting the entire LGBTQI+ community to come party with us.

Whether you ride with Dykes on Bikes and just want to spend the night partying with some fantastic people you are welcome to join us.

Tickets are available through Sticky Tickets